Hope everybody had a nice weekend and a nice Valentines Day on Friday!

I have added captures to the gallery of Sarah in her 1999 movie 'Simply Irresistible' :

Sarah Michelle Gellar fan now has a Pinterest account! I've only just got used to how it works, haha! I've already pinned a few things so if you have an account, head over and enjoy! It will be, like my other social networking sites, updated frequently, so hit that follow button! :)  Link is below!

Review : The Crazy Ones - ''Dead and Improved''

In the latest episode of The Crazy Ones, Simon has to eulogize a jingle man who has passed on but was summarily hated by everyone he worked with, at the behest of the man’s daughter (guest star Missi Pyle) while Zach and Andrew deal with another client (guest star Kurt Fuller) whose erratic behavior over future Charmin ad campaigns is disturbing, to say the least. I have to admit, this wasn’t my favorite episode, but it was still very good and had me laughing out loud throughout the episode.
I loved seeing Kurt Fuller on The Crazy Ones, especially in a role that’s even weirder than Woody, the character he plays on Psych. Learning about his Crazy Ones character, and why he’s so over the top and crazy about how he wants Charmin to be promoted in future ads was a great, if sad, moment. Of course, that’s all overshadowed by even more outlandish behavior that is sprinkled throughout the rest of the episode.
Missi Pyle was also great in her guest role as the daughter of the deceased jingle creator. Her character knows how universally hated her dad is, but still wants an amazing funeral and eulogy from Simon, and she uses the power of her wobbly lower lip to get her way. It’s a hilarious subversion of how people assume and stereotype women getting their way by tearing up and/or crying. It’s overdone and over the top to perfectly complement the tone of the episode. I also loved that it allowed for my favorite quote of the episode: “We’ll put the fun in funeral.”

Fred Melamed also had a guest appearance as himself. He was great, just like he was last time he was on the show.  This time, when Simon tries desperately to get him to help with the funeral, he ends up telling Fred that anything he says sounds good. Fred replies with one word, syphilis. The moment was perfect, and I felt like it could have possibly been a reference to a line spoken by Spike inBuffy the Vampire Slayer, which made it all the better.
By the end of the episode, a truly epic funeral is taking place, and it is exactly the spectacle that it was meant to be, up to and including the aforementioned Charmin being used in place of tissues. It also created some tender father/daughter moments between Simon and Sydney while he gave the eulogy. Those moments were really sweet, and helped to cement that The Crazy Ones is, at its heart, the story of a family that just so happens to work together, and that’s what makes this show work.
Source
Posted by Nicole at 00:07 No comments:

Just a quick post to let everyone know, in the next few days, i will be working mainly on getting the crazy ones stills and episode captures up to date, as this is currently on tv, i feel this is the most important thing to catch up with at the minute. Also, i have removed caps from the two episodes of Buffy i uploaded to the gallery as i realised how many there were in the 1st episode, so these will be done again to make it easier and re - uploaded in the next few months, along with the rest of Season 1! And of course, the other fantastic 6 seasons, thanks for your patience, it is very much appreciated, i myself am of course, a MASSIVE 'Buffy' fan so i'll be glad to have them all in the gallery myself! Soemthing for you guys to look forward too :) any questions please feel free to post in the comments and thank you very much for continuing to visit this site, it means a lot :)

High Definition screen-captures from yesterday's Crazy Ones have been added to the gallery :

Email ThisBlogThis!Share to TwitterShare to FacebookShare to Pinterest
Labels: Candids

I have started working on the films section of the gallery and am working my way up from the very beginning of Sarah's film career.  Check out the links below to see what i have already added :)

Home > Films > I Know What You Did Last Summer > Posters

Home > Films > I Know What You Did Last Summer > Promotional Stills

Home > Films > I Know What You Did Last Summer > Promos

Enjoy :) and remember to keep an eye on the gallery! :) 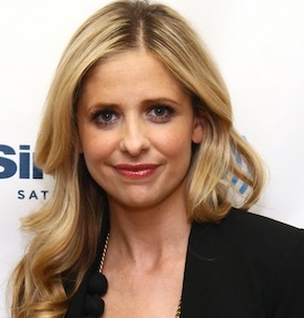 Sarah is nominated in the 'Best Actress in Social Media' category!
There's still time left to vote so vote for Sarah by clicking here. :)